Watch Your Mouth: A Found Poem

double down
the fiscal cliff
into your man cave,

Boot that (not) amazing
bucket list up Capitol Hill;
viral infections only
kick cans down the road.

Shared with Imaginary Gardens Open Link Monday
Posted by Laurie Kolp at 8:55 AM 23 comments: Links to this post 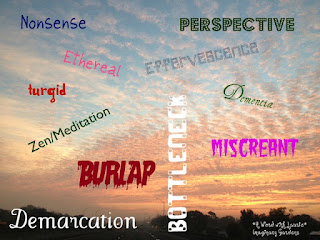 I thought it all nonsense,
this ethereal scene
unfolding before my eyes:
a holiday bottleneck
wrapped in stiff burlap,
those behind the wheel
acting like turgid miscreants
with dementia, demarcation
a necessary counterattack.

Must we go back
to kindergarten,
review boundaries?
Or direct traffic to
the nearest park,
offer free meditation guides
with effervescent appeal,
discuss change of perspective
from hustle/bustle to Zen?

Prompt inspiration: Imaginary Gardens~ A Word with Laurie
Posted by Laurie Kolp at 8:43 AM 18 comments: Links to this post

Email ThisBlogThis!Share to TwitterShare to FacebookShare to Pinterest
Labels: A Word with Laurie, Imaginary Garden with Real Toads, wordles

Tiptoe around that certain person
who, if you come too close, might
detonate cutting words, evil glares
daring to stretch one's limber attitude
into a back-breaking, tedious attempt
for tolerance. Take cover before
shrapnel penetrates your heart.

Email ThisBlogThis!Share to TwitterShare to FacebookShare to Pinterest
Labels: 3WW


Posted by Laurie Kolp at 8:47 AM 8 comments: Links to this post

Why Not Red Delicious, Granny Smith or Honeycrisp?

Kids are sent to school with apples,
ones that crunch numbers and bytes
where red is read and juice is charge,
a daily dose of  energy every hour.

They take their apples out to recess
feed their egoism with plans to share
as others huddle around hoping for
bits of Internet, uncensored.

And hungry games are played
with guns and blood and gore,
so much they get desensitized
to violence. Reality a funhouse

mirror, warps young minds that morph
before their time, the video games
a fantastical  escape into the dark
a hide and seek, perception skewed.

I strongly believe that violent video games of hunting people and whatever else they do (we don't let our kids play them) contribute to the problems of today. Not long ago, I was in a game shop and the shelves were full of games for mature audiences. It used to be that these kinds of games were placed up high, but I noticed they were all over the shelves at eye level. I asked the teenager behind the desk why and he said because that has become the norm, that as a society we are desensitized to violence. I left without finding anything suitable for my boys.

What happens when someone is mentally unstable? Does that person lose touch with reality in such a way that the game becomes their world and he/she begins to play it in real life? What do you think?

Posted by Laurie Kolp at 9:23 PM 29 comments: Links to this post

Clothes might be nice,
Pots and pans to drum,
A remodeled kitchen,
For my iPod, tunes to hum.

Enough space for all the poems
I'd like to write next year,
Health, abundance for us all,
A daily attitude of cheer.

In the Company of Dogs

Is this a battle
of the sexes, or maybe
perhaps breeds?

A one-dog-up-man-ship
vying for all of me?

In my lap,
a fluid harvest
awaits, treats
cultivated
especially
for each one

or so you'd think
by the way
they act

as jealous as
a teenage crush.

Mesmerizing flames
within the hearth
crackled as I
tried to warm my back,
then ease into the chair
for full effect.

You watched me
from the wooden bench,
fingers resting
on the ivories,
palms on edge
of desire as you
seduced me
with your eyes

caressed my breasts;
the piano came
to life with a
metronomic
symphony.