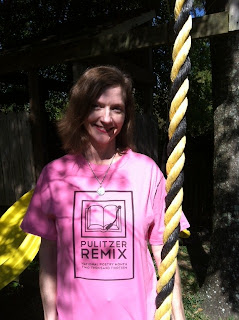 I know it's been like forEhVahr (forever) since I posted on this blog, and I do apologize; but it's not that I haven't been writing. In fact, I've had my nose to the grindstone for months working on editing a book and getting poems ready for this project I'm involved in for National Poetry Month. It's called the Pulitzer Remix, and it's put on by The Found Poetry Review. Poets were selected to participate and were assigned a Pulitzer winning book. From that book, we dedicated ourselves to writing a found poem each day for 30 days. 85 books/poets X 30 days = 2,550 new poems! Wow! I worked tirelessly on this in February and March, along with the editing. The book I was given is John Updike's Rabbit at Rest (so please look me up here).

Now it's April, and I feel like a marathon runner who has trained for months, but when the race comes, is left behind. I mean, I was elated when my poems were all written for the Pulitzer Project so that I could devote April to writing new poems every day from various venues such as Poetic Asides PAD and NaPoWriMo... AND keep up with my regular sites. Isn't that what poets do in April? Drive themselves crazy poeming? Not me. I'm stuck. Let down. Depressed. I planned for a huge event~ like a poet's wedding~ and am now... wordless. So I decided to fill you in on what's been going on while hoping to spark my creative juices. Hopefully it works.

In other news, I was delighted to have a piece published in Oh, Sandy: An Anthology of Humor for a Serious Purpose. All proceeds from this book will go to help the victims of Hurricane Sandy.

Also, my photo was chosen as the cover for MiCrow 8: Winter 2013 Luminous.

That's enough about me. What have you been up to?

You know what's been going on for me, but this is the first I've heard of you, my over-achiever friend in poetry. Gosh. Prescription: Have a glass of Dionysus and climb out of the Updike-ian mode for a while. Take a walk or a nap and record what you see. Make love to yourself. (Maybe I shouldn't have said that here?) Sorry, I meant Love Yourself! You are the best, and your soul has wings that will lift you after some self care.

Thank you, Susan. Hope everything is going good for you.

smiles. you have been busy...you updikian poems are going well and i am enjoying the journey...congrats on the published piece as well...and for a good cause...

congrats on all of your work coming to fruition! i wanted to thank you for coming by my blog and leaving a comment! really appreciate it!