Blood in the sand. Get help fast.

The text hit me like a juggernaut. I hurdled through the beach house, slid down the stairs and made it to Sam in no time flat. I didn't expect to see such a sight; her face a stained glass window lying lifeless on the broken shells, panicked eyes crying out in pain.

"What happened?" I asked Mike.

Sam's sapphire eyes were a sea of mass confusion and as I straddled myself over her to examine them, I thought I must look like a dog sniffing the sand; not an overprotective mother doting on her injured teenager. Who cared anyway? I was entitled.

"We were running and having fun when Sam tripped in this pile of shells."

The brouhaha had attracted a flurry of beachcombers who oohed and aahed at the scene before them. An elderly man with sun spots on his balding head stooped down beside us and began examining the fragmented shells. Within minutes he was shouting for us to leave.

"Hurry! Evacuate this area. There's been an invasion." 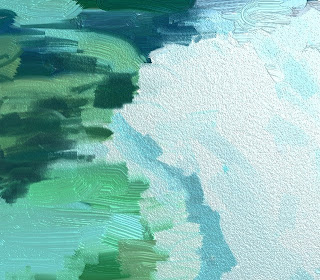 I followed the man's gaze to the rough peppered sand. It was transforming into smooth sand colored in shades of fluorescent greens and blues. Foam was seeping out like suds from a washing machine and covering our feet with a warm gooey blob.

Before I could open my mouth, Mike had scooped up Sam. But then he just stood there frozen and looking quite amiss.

"Hurry! Get Sam to the cabin. Take care of her until I get there."

Mike did not budge. Did he not hear me? I repeated myself and still no response. So I went over to him and poked him on the cheek.

"Hello? Anyone in there?" I said in his ear. Nothing happened. I looked at Sam. She, too, had the glassy glaze in her eyes and she was as still as a mannequin. That's when it hit me.

...please come back next week for more of the story.

Picture Inspiration: In Tandem
Posted by Laurie Kolp at 7:33 PM

Email ThisBlogThis!Share to TwitterShare to FacebookShare to Pinterest
Labels: In Tandem with Jinksy

" The thing from outer space?" Gooey blobs, eh? Like a stray caramel that gets lodged in a pocket and goes through the washing machine... Ooer!Thanks for riding the Tandem through these twists and turns of a story. ♥

This is exciting! I wonder where next week's tandem will take you?

!!! This is why I don't care for the seashore. The sharks and jellyfish are enough to worry about... and now something else? !

This is really cool!

Still as a mannequin...another installment.. sure.

Thanks for writing this ~