A decade in review, part I 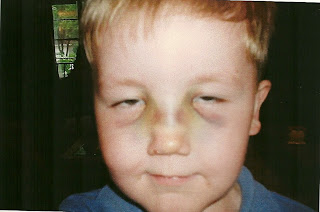 My poor baby Andrew! At three-years-old, while in preschool, Andrew fell during outside playtime and broke his nose. I remember this day five years ago as if it happened yesterday. I had JUST left his class where I had celebrated with my oldest son a Mother's Day tea. My mom had kept Nicholas, who was only one, so I could give Andrew my complete attention (this is the same year Katie was in the hospital with pneumonia, I might add). I had barely made it to my mother's house to pick Nicholas up, when I got a call on my cell phone that Andrew had fallen on the playground (on a rickety bridge) and his nose might be broken. I rushed back to the school, my "high" from our special tea brought down like an elevator within seconds. When I saw my sweet son, blood and tears coming down his face, with an ice pack pressed precariously to his nose, I had a hard time keeping my composure (and the contents of my stomach down). But I stayed strong and enough adrenaline came through to keep me going. The director had already called our doctor so we went straight to his office. The most horrible part of this whole story, which may come as no surprise, is when we got home. Nicholas saw Andrew's nose, went up and poked it and the bleeding started all over again. Sigh...'tis the way it goes with children.
Posted by Laurie Kolp at 1:34 PM

oh my... that is a terrible break. Poor baby. yes, boys will be boys! my lil brother was constatly getting picked up in an ambulance.
Happy new year my friend! Love your blog!