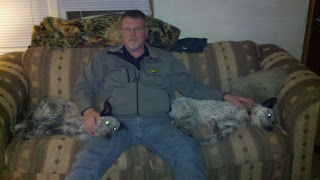 Mark is the oldest and the biggest.  He loves his five dogs so much that he gives extra attention to them when they hurt themselves.  Mark sends us pictures of his "kids" and brags on them like any proud Dad would.  His eyes light up and voice softens at the mere mention of dogs.  Pete and he can spend hours sharing dog stories with one another. 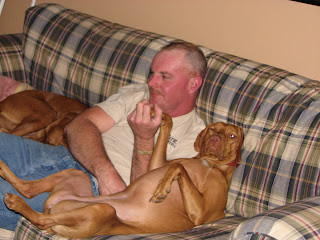 Then there's Chris, the youngest.  Roxie and Ginger sit with him on the couch and watch TV.  Notice how he holds the dog's hand while the dog winks at the camera.  I'm surprised they're not all smoking cigars together!  Chris and Chelsea now have baby Jonathan, but Chris manages to squeeze in some time with the dogs.  The whole back part of their house is for the royalty, Roxie and Ginger.  Even though it has been gated off because of Chelsea's keen mother's instinct, those dogs have a pretty good life.  I mean, they can come and go as they please through their little doggie door.  They get treats daily.  And they get to watch TV all day. 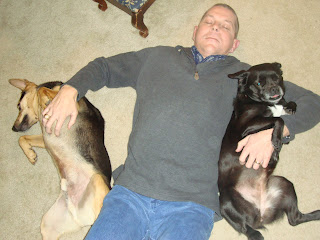 Last, but not least, is my husband.  Now Pete, the middle child, doesn't fool around.  He gets down to the nitty-gritty, right on the floor with the dogs.  Partly because I won't let the dogs on the furniture, but mostly because he wants to.  Pete even cuddles with Snowy (the female).  She would sit in his lap all day if I let her.  I swear Pete can spend thirty minutes petting Jake and Snowy and then turn around and tell me his hands are too tired to massage my feet.
?Sometimes I wonder what their connection with dogs really is?
Pete and his brothers are alike in many other ways. When I have the opportunity to spend time with them, I notice similar idiosyncrasies and mannerisms. Granted, they differ according to which brother it is, but they both have their own set of kindred connections with Pete.
My sister (in-law), Chelsea, and I have fun talking about things Pete and Chris do the same way, even though they haven't lived with each other in over 25 years.  One example in particular is how they deal with babies. A few weeks ago when they were visiting, Pete would pick up Jonathan and play with him the same way Chris does. I remember when my babies sometimes even mixed Chris up for Pete, they look so much alike.
I love the Kolp family - kids, dogs, and all.  Now there is a new generation of Kolp boys: Ricky, Chris' oldest, Andrew, Nicholas, and Jonathan.  I can't wait to see what comes next!
Posted by Laurie Kolp at 6:16 PM

That is so funny! It's almost along the same line as "boys and their toys"! LOL!! It's funny too how similar brothers can be in mannerisms. My dad, the traveler of the group, is so different from his 3 brothers (2 of which are deceased). But, when I get around my Uncle Wayne's (deceased brother) sons, they sometimes slip and call him Wayne-HAHA.

Thanks for your comment on my latest poem blog! I have submitted to poetry.com and been published through them, albeit non-paid. I have also been offered to have individual poems published through a similar organization in the UK. I would love to publish my own book someday, but don't feel I am ready for that road yet.