Flat Stanley goes to the beach 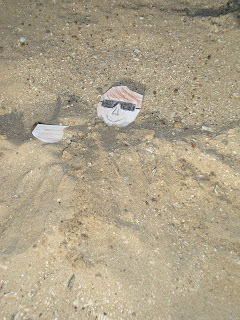 Elementary classes everywhere participate in The Flat Stanley Project each year. The boys took part in this project when they were in first grade. In the spring they brought home a plain Flat Stanley paper doll, a character form a children's book of the same name. We then had to mail him to a friend or relative in another town. Andrew and Nicholas sent him to their cousin Matt. Andrew's Flat Stanley toured the Texas A&M campus. Matt and his wife Jen (then girlfriend) decked him out in maroon Aggie gear and took pictures of their excursion. Then they sent him back and Andrew shared his Flat Stanley trip with the class. When it was Nicholas' turn, Matt and Jen were in graduate school near Austin. They dressed him up accordingly and took pictures. Again, Nicholas presented the results to his class.

Imagine our delight when I discovered we had the opportunity to participate in the project once again, only this time we would be the ones dressing up Flat Stanley and taking him somewhere. A friend of mine from my BD group (see previous post) told me about it. A teacher was getting the names of friends and friend's friends so that she could have each child send a Flat Stanley to different parts of the world (my pal lives in Germany). The teacher created a Facebook page for the volunteers. When he finally arrived at our house last week, I could see the envelope had been carefully addressed in a child's handwriting. Flat Stanley had been cut out with love by the child as well.

We decided that since he was from Ohio, Flat Stanley needed to go to the beach. So yesterday we dressed him in swim shorts and sunglasses and drove him to the Bolivar Peninsula. He got to ride the ferry to Galveston and back, where he saw Seawolf Park on Pelican Island and the old sunken ship close by. He witnessed a tugboat pushing an oil barge, sailboats and dolphins. Stan (we were on a more personal level by then) enjoyed feeding the seagulls, playing in the sand and watching the kids splash in the freezing surf. They never can resist the beach. Here are the highlights: 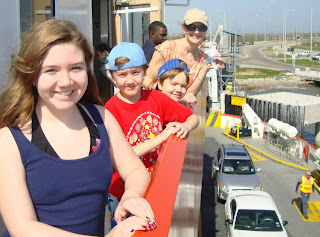 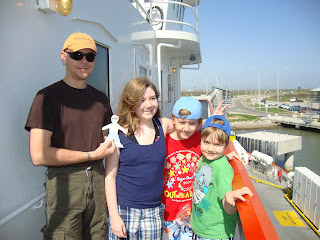 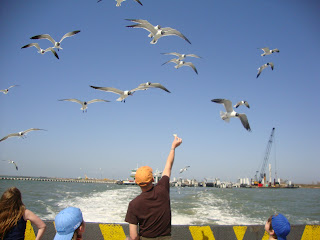 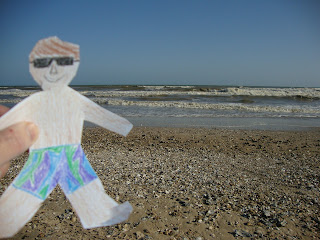 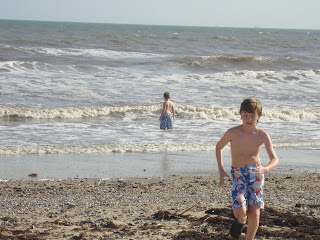 We are so happy Stan came to visit and hope next year will bring another golden opportunity.
Posted by Laurie Kolp at 9:43 PM

I love Flat Stanley! I remember when my brothers class did this and I took the pics. He traveled from California to Louisiana and back again. My brother loved it!

I am still waiting for my Stanley to arrive. I hope he comes soon.

It looks like you are already having fun with your Stanley. The beach was a great idea.

I'm sure you'll be doing it with your girls, Sylvia.

Linda- Stan has quite a way to go to get to you. That alone is a journey!