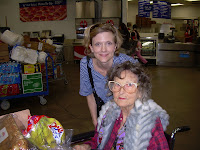 Here's a picture of Ms. Angelle and me at Sam's. Poor thing has been suffering lately. Apparently her back is giving her a time. The pain is unbearable and I have spent the last couple of weeks taking her to doctors, getting blood work and x-rays- all to no avail. I'm saddened to say that it appears that most of the doctors we have been to don't want to deal with a 93-year-old cranky old lady. They all just refer us somewhere else. Wednesday we went to a nice young doctor who very politely told us he didn't deal with people over 90. I guess when Ms. Angelle took off her shirt to show him where her pain was, he couldn't deal with the sight. He did give her a shot, though that knocked her out. The nurse gave it to her real quickly and then shooed us away, telling me I'd better get her home fast. She barely made it to her bed and she was out like a light. Ms. Angelle told me later that was the best $60.00 she ever spent. He gave her a month's prescription of anti-inflammatories, too. I'd better get my phonebook out- I have 30 days to find another doctor. Any suggestions?

I am going to see a back specialist 2morrow with Texas Orthopedic. His name is Dr. David Wimberly. He won an award for compassion and skill. He also finished #1 in his class. His # is 713-799-2300. It is horrible for a doctor to do that. I think you need o do a guest column on this. I'll say a prayer for the both of you & that doctor who I hope will live past 100.

It is such a small world- can you believe that Pete has been to Dr. Wimberly too? In Houston right? I didn't know your back was giving you such problems!

Oh Laurie ~ you a beautiful soul. If you can find an orthopedic that will give her a shot of Lidacane, that would be helpful. I had that done to a knot that was so wicked in my shoulder blade that was causing pain all the way up to my neck. It numbed and relaxed it & it's been almost a year & its still good :).

I happened across your blog via PoeticAsides. It's a sad world we live in when doctors treat humans the way they did your lady-friend. My mother is a geriatric nurse in Michigan, so I hear about a lot from her. I would suggest looking for a geriatric doctor or even contacting local nursing homes/assisted living facilities to see if they have any suggestions on a good doctor for her (that is, if the one suggested already doesn't pan out). You may find them to be very resourceful.

By the way, I think there is a back pain epidemic going around. I took my 83 year-old grandma to the docs last week for her back. They said it was the siatica nerve and gave her two shots and a scrip.

Good luck on your search!