Through Thick and Thin with... Peanut Butter? 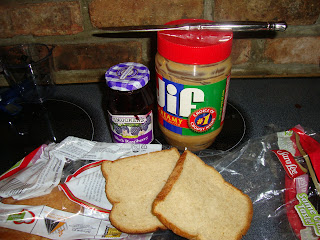 When I married Pete and promised to stick with him through thick and thin, I never imagined that peanut butter would be the adhesive. When I sit down and analyze our relationship, how it's grown and changed through the years, I can easily see that peanut butter has molded us into contentment.

Pete loves it. He told me stories while we were dating of how his mom bought the institutional size spread and left it on the counter with fresh white bread so that Pete could swoosh it down whenever he wanted. Pete was rail thin and always on the go, and she practically begged him to snack on it.

I'd had my share of PB&Js growing up and was of the attitude that it would put five pounds on my hips if I dared a mere sniff; but shortly after we married, Pete proved me wrong. He reawakened my love for the stuff while I was pregnant (which occurred three months after marriage) by making toasted peanut butter sandwiches for me. When he spread the creamy concoction on the warm bread, it melted. That was sheer ecstasy for my cravings, and I took advantage of eating as much of the fattening goo as I could since I was already gaining weight.

By the time I had Katie, I was already addicted to nighttime foldovers with peanut butter and grape jelly. The healthy, protein-packed snack gave me a lift during those sleep-deprived months. I made it through the next four years of birthing three and having foot surgery in between on the delectable snack. It was quick, filling and good. I discovered I didn't have to run five miles a day and eat salads all the time to stay fit and trim. And as happens in most marriages when partners take on each other's habits and idiosyncrasies, Pete had converted me to a peanut butter lush. At least I lured him over to the wheat bread side. I mean, as long as it's fresh enough to melt in your mouth, who cares?

Through the years our taste has changed a bit. Variety is the spice of life, right? We started out as Peter Pan lovers (of course, I love Peter!), but quickly converted to my childhood favorite, Jif, after the salmonella scare years ago. Pete's gone from peanut butter and jam to just peanut butter to crunchy with black raspberry. He's now back to smooth and jam. I always try out his new love, but revert back to dependable smooth and grape jelly with an ice cold glass of milk.

And at the end of the day, after the kids are tucked in bed, we cuddle on the couch with our treat. There's nut-n-butter than that.

Maybe we should invest in peanut butter stock... what do you think?
Posted by Laurie Kolp at 7:31 PM

I love PB, prefer it on toasted wheat. If I have PBJ, strawberry jam is the way to go. Apple slices with PB is also good.
Katarina likes PB with Nutella.

I think everyone has a preference when it comes to what kind and how they eat their PB. And the possibilities are endless.

This is such a cute post Laurie... you got me craving peanut butter. Chad's a PB Lover too!! I used to love it smeared across celery or on saltine crackers and like Linda above, I would make peanut butter toast. This is kinda gross so stop reading now if you don't like gross: I used to make PB toast, lick off all the PB, eat the crust off & then fold the bread into a small square and eat the rest! LOL
Yeah PB & apples are good - you should try almond butter... Oh boy - it pretty darn good too!!! especially on apples :)!
Hmmmmm ~ i wonder how PB coffee creamer would taste??

i eat a lot of peanut butter (crunchy, thank you!) on french bread. YUM!

thanks for stopping by my blog and leaving a comment! really appreciate it! God bless you and yours!!!