Shepherd girl in a hectic world 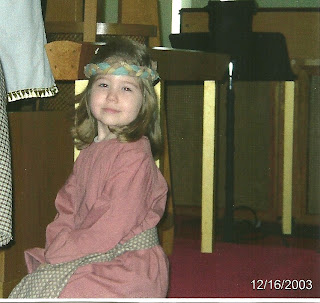 When Katie was in preschool, she played the innkeeper's wife in the Christmas play.  She was so precious.  I remember how she spoke her one line so loud and clear.  The teachers said nobody had ever spoken so concise and with such confidence.  The other participants were well-behaved and all agog in wide-eyed excitement, too.  It was a positive experience for both young and old. 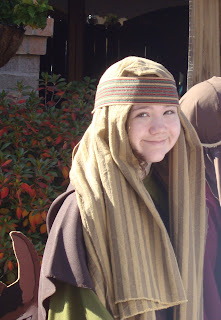 Katie had another opportunity to participate in a Christmas tradition- our church's live nativity scene.  This time she was a shepherd girl.  The junior-high experience was quite a contrast to the preschool play.  One kid told her mom she hated her in front of everyone, while another stood against the wall pouting after what had obviously been a mom/daughter spat before their late arrival.

The 6th, 7th and 8th graders had to pose for an hour outside the church.  Katie and another shepherd girl remained quiet as told, but talking, gum chewing, baby Jesus passing, giggles and who-knows-what-else could be observed by this keen parent (and others, too).  Here are some comments I heard from attendants:

"I have never seen such unhappy faces up there."

"I don't think they made gum back then."

Well ~duh~ with prepubescent teens, YES!  Unfortunately, they are not in preschool anymore.

Considering only a handful of volunteers showed up and some of the kids were not too thrilled to be there, I think they did pretty well.  I commend them for taking time out of their busy schedules to sit still and share the joy of Jesus' birth.  After all, without Him, there would be no Christmas.
Posted by Laurie Kolp at 1:44 PM

Nice post. What a difference ages make and I commend them too ;) ~ great way to point out the positive reason for Christmas and recognizing the love and effort.