A bar brawl, fight with a chair and unexpected bonk of the heads: There's no hiding black eyes 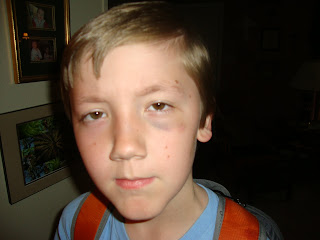 A black eye; this unwanted baggage always seems to appear at the worse times. There's no hiding the blacks, blues, purples, reds, yellows and greens no matter how hard you try. The three incidents below really happened, but how they were "covered up" is interesting. Notice how the two male stories differ from mine.
*
Last week, Andrew was sitting in an old orange school chair in front of the kid's computer, leaning back and rocking as he anticipated his next gaming move. All of the sudden I heard a WHOOSH / THUMP and then Nicholas' concerned voice:

I quickly turned my head and found Andrew on the floor, hands covering his left eye. I was surprised he wasn't crying, because when I peeled away his fingers I could see the bruise already forming. The chair had flipped with him and the bottom of the leg had come back around and poked him in the eye (not directly, thank goodness, but close enough). We applied ice immediately, but the next morning it was apparent that we could have done nothing to stop nature's course of healing.

A few days later, right when the boldest colors of a black eye usually peak, Andrew had his award ceremony for earning his blue belt in TaeKwonDo (yeah, Drew!). I have to wonder if everyone thought he got his shiner while sparring. A few asked him, and this is what Andrew said:

"I got in a fight with my chair and won."

*
Just two days before graduation from Non-Commissioned Officers (NCO) School in Paris Island, North Carolina, Pete was in a fight. The E-Club (Enlisted) was a well-frequented spot for the guys back then; kind of like an oasis in the middle of the desert. Of course, I'm sure Pete was only a victim and could never have stirred up trouble, so I will pass on the details. The important thing is that he had a big ole' shiner on the day of graduation; and he was graduating #1 in his class. When the commanding general of the base handed Pete his award, he whispered these words:

"What happened to your eye?"

"Oh, I just slipped in the shower," Pete mumbled.

"Does the other guy look that bad?" Asked the general with a wink.

Pete showed perfect proof that he was a tough marine as he walked across the stage with a serious expression on his colorful face.

*
Then there was the time I was stranded in Galveston while on a college weekend trip. I bumped heads with a friend on the seawall while waiting for my summer roommate Mitzie to show up (she had abandoned me at a night club, but that's another story). My mother came to visit me the next week. I tried to disguise my shiner with gobs of eye makeup, but there was no fooling good ole' Mom. I could tell she was onto me when she said this as soon as she saw me:

"My God, Laurie. You have on so much eye makeup. Since when did you start wearing all those different colored eye shadows?"

"Oh, you know Mitzie. She works at the Estee Lauder counter. She was practicing new methods on me."

"I see," Mom answered with a quizzical look.

I did not appear rough and tough; I looked like a little girl who put on too much eye shadow while playing dress-up. And I caked on the camouflage everyday until my eye returned to normal.

Did you notice that Andrew and Pete bragged about their black eyes, but I tried to cover mine up? To men, shiners are war stories. Women do whatever they can to hide their scarlet letters and keep them a secret. But we're really only fooling ourselves. The truth is visible in the oily blobs making rings around our eyes.
Posted by Laurie Kolp at 9:39 PM

Wow - some shiner! funny story about your mom....lol

Thanks, Jeni! Luckily my black eye was right below my eyebrow, so I could at least try to hide it.

Andrew's tough look on his face makes the shiner look even worse, don't you think?