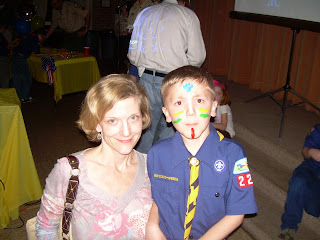 Today is Andrew's 8th birthday. He was my biggest baby, weighing in at a whopping nine pounds and twenty-one inches long. Now he is my skinniest child. Poor thing was so miserable when he was a baby. He cried all the time. We thought he just had colic and suffered through many sleepless nights. Every time we would lay him down he'd start to cry, but when we picked him up he stopped. We eventually took him to a pediatric gastroenterologist who diagnosed Drew with acid reflux and put him on a VERY expensive formula. I had been breast feeding but was willing to give it up if Drew would feel better. The formula (and Prevacid) really made a world of difference. The funny thing is that most babies with acid reflux spit up a lot, but Drew did not. The acid was only coming up in the back of his throat. That is why we had no clue.

I am so grateful for Andrew! He is smart, compassionate, easy-going, kind, considerate, thoughtful, well-adjusted, and the list goes on. Being the middle child, he is the one who never argues to get his way; he simply goes with the flow. He's the one who will agree to go last simply because he wants to avoid conflict with his siblings. So although he was my most difficult baby, Drew is an easy child now. Happy Birthday Andrew!

Awww... Happy Birthday! You certainly had a BIG baby 8 years ago. And, I can relate to the acid reflux. Gabi was diagnosed with it and STILL has trouble sometimes. She was never colicky, just spit up a lot and would writhe a lot in pain at night.

Happy birthday!!! What a beautiful family you have- so much to be grateful for:)