Who's Blowing Out the Candles? 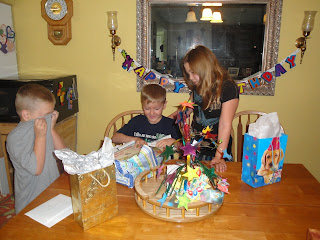 One of the advantages of having children so close together is that they enjoy the same things. Take, for example, birthday gifts. When one of my kids gets a gift, it is usually something they all can enjoy. This great fact rang true over the weekend with Andrew's birthday presents. Here is a list of some of the items Andrew received for his birthday and who actually enjoyed them:
1. The first book in a new series "The 39 Clues"~ Katie grabbed onto that book in the blink of an eye and read it in one day. She is now begging for the second book.
2. A Lego Star Wars model~ Andrew's friend gave that to him when he came over Saturday to spend the day. While they were at the computer, Pete and Nicholas sat at the kitchen table and assembled the whole thing.
3. An Ice Age Wii game~ Nicholas must have thanked Nini and Papa ten times for Andrew's new game.
4. A Mario Brothers Nintendo game~ Katie snuck it into her room and played it while Andrew and Nicholas took turns on the new Wii game.
Of course, being the kind-hearted, giving person he is, Andrew gave permission for the others to test out the new gifts. He got many more cool gifts and had an awesome birthday (except when Nicholas kept blowing out the candle during the "Happy Birthday" song...).
Posted by Laurie Kolp at 6:45 AM

You have the sweetest children Laurie!! Maybe because they are being raised by such loving kind parents. I don't know them, but I love them :).....xoxo