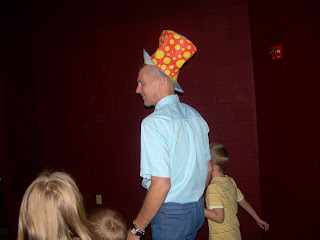 I have always loved the library.  When I was little, a big part of my summer was reading.  I'd come home with a big pile of books each time we went to the library.

Now my kids love the library. In the summer we always participate in the reading club and have gotten some wonderful rewards: tickets to the circus, petting zoo, magic shows and coupons to area restaurants and stores.

I have taken the kids to the library since they were very little.  We would go to story time each week, and many times to the park afterwards.  It was a weekly outing we all looked forward to.

One time I decided to vary up our routine and take them to the downtown library.  Nicholas was still in a stroller.  I can't remember exactly what ages the kids were, but they were very young.  Back then the children's section was in the basement.  Since I had the stroller, we had to take the elevator down.

I don't know if your kids do or ever did this, but when we all got into the elevator, Katie and Andrew started arguing over who was going to press the button.  They both started banging on it until we realized nothing was happening.  Had they caused it to malfunction?  We pressed the open button a few times and it eventually opened.  Andrew hopped out like he had ants in his pants or something, because the door only opened a wee bit and then it closed suddenly.  After that we could not get it to open or close.  We were stuck in the elevator.

I began to panic, feel claustrophobic and worry about Andrew getting abducted; after all, we were downtown, right?  I did not have my phone either.  The only saving grace (and I think this happened for a reason) was the conversation I had had with Pete only a few weeks ago.  My dad was having a procedure done in the hospital, and we overheard some people in the waiting room talking about how they had gotten stuck in an elevator.  Pete had told me if that ever happened, just manually open the doors by pulling them apart with my hands.  I did that and it worked.  Thank the Lord, Andrew was waiting right in front of the door.  It had seemed like ten or fifteen minutes, but in retrospect I know it was only seconds that we were separated.  It's amazing how my mind can rummage up so many scenarios in such a short amount of time.

Needless to say, we left the library immediately after the incident.  But I made sure to stop by the main desk and tell them to check the elevator.  We have not been back to the downtown library since that day.
Posted by Laurie Kolp at 9:43 PM

Oh Laurie... what an amazing story! Great memory. makes me think of the many times my dad took us to the library too. Thank you for bringing that up :)